You might call this a "minority opinion" - I imagine few would take (on first glance) come to the same approach. However, I want to get it on paper because I think it's a deeper solution - and the issue may recur.

CiviCRM is a database application which tracks related data. For example, an Activity may be related to a Case and three Contacts. This creates the question of referential integrity. For example, if one of those three Contacts is deleted, then the relation (aka "foreign key" or "reference") between the Activity and the deleted Contact becomes nonsensical, and you must do something to make the data sensible again.

CiviCRM builds on top of MySQL, and MySQL provides one mechanism to deal with this: ON DELETE. When declaring the schema for Activity and Contact, you can set a rule to resolve this nonsensical situation by either (a) putting a blank (null) value into the reference or (b) deleting the record which has the invalid reference. This process can be thought of as s cascading or propagating. (Conceptually, the deletion of Contact could trigger the deletion of an Activity which could trigger the deletion of a custom dataset for that activity).

CiviCRM also builds on top of PHP. It has hooks and events, which leads to another mechanism: by subscribing to some event (e.g. hook_civicrm_pre), you can take some action before or after deletion. This mechanism can also provide the cascading or propagating effect. Compared to MySQL, this empowers a developer to define more nuanced cascading rules.

The basic concept of "Enriched Deletion" (for want of a better name) can be seen by comparing these two screens. First, we have a normal confirmation dialog that you might show to user before deleting an important record:

With enriched deletion, the user (or agent; more about the expanded view in a moment) has visibility and discretion into the consequences of the deletion: 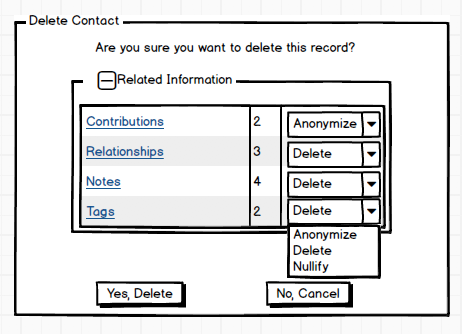 They have the ability to see what data is affected by their action -- and to decide what the impact will be.

The cascade policy is what you in see the table above -- a list of relations and the rules about how to handle each stale reference (delete the record, set to null, block deletion/raise an error, etc).

The default cascade policy is, well, the default. It is determined programmatically. It is mediated via event/hook, and the site administrator can make overrides/customizations.

A screen such as the above is a thin wrapper around an API. All standard API entities would support two actions:

Rare is the user who clicks "Delete" while thinking, "Please, I hope the next screen is more complicated!" So why would you add this extra panel to the "Delete" action?

Regardless of this Gitlab filing, some cascade policy already exists. It must exist. The question is its form, content, comprehension, maintenance. Who can influence it?

However, there is no visibility into this behavior for a user. Whatever the cascade policy is, there will be elements which feel a bit grey or uncertain. Users will be in the dark about this - they won't even think about the extended implications of a delete until after it matters. The existence of extensions heightens the mystery - a user isn't in a position to know what extensions are, and an admin isn't in a position to say how each extension does (or does not) adjust the policy.

CiviCRM is a modular, multi-organization, "customizable/off-the-shelf" system. Consequently, it is difficult to make one set of judgments for grey area things -- especially when there's an open-set of customizations for each site. Even if you do understand the policy, programmatically customizing the policy is an expensive proposition.

The basic concept of "Enriched Deletion" is to formalize the cascade policy in a way that realistically allows+reconciles influence from (a) developers, (b) site admins, and (c) backend users.