Early experiments using Gitlab (lab.civicrm.org) started around March 2017, as a tool to help with managing CiviCamps and the civicrm.org website, followed by the infrastructure issues, marketing, etc. The initial intention was to provide a collaboration space for areas that didn't fit in JIRA/Confluence. People often resorted to using direct emails with many CCs/forwards, since it was hard to know who was responsible for what.

As an experiment, we let Gitlab grow organically as a sort of beta service, collecting feedback. Initially, replacing JIRA was not on the table. Gitlab seemed to be a good candidate for replacing a lot of the left-over content of Confluence (after the migration of dev/admin documentation to mkdocs) and tracking non-core issues.

In November 2017, we reached a point where we had to re-evaluate what to do with JIRA, whether Gitlab could help with the extensions ecosystem, and how Gitlab can help the larger CiviCRM community.

As a result, JIRA tends to be used only for the issue title, brief description, "affects version" and "fix version". Most of the discussion happening on the Github pull-requests. With few people using JIRA, it has become difficult to discuss feature improvements, triage issues, prioritize by community interests.

We have been reaching out to developers, users, partners, members to ask about what works and what can be improved. You can see the roadmap in infrastructure/gitlab#2 which includes bits on how the discussion evolved. Our plan is to come up with a final roadmap by February 2018 at the latest. While we have not made formal announcements about JIRA yet (as of December 2017), we have been documenting the process and raising awareness in various spaces/channels/lists/sprints/camps, gathering feedback as we go.

The roadmap is in: infrastructure/gitlab#2

Since December 2017, new projects have been created under the Development Team group in Gitlab:

These groups can help move forward discussions from the dev mailing-list, transforming ideas into tangible steps forward. They also help bridge the gap between Stack Exchange and Pull-Requests (which used to previously be either on the old forum or on JIRA).

Further discussion is slowly going towards a consensus that instead of having one monolithic issue tracker,

While this could be done in JIRA, it required complicated dashboards. Very few people were comfortable using them. Gitlab makes discovery easier.

This structure can also help with funding feature requests. For example:

This has not been formally discussed with the Extensions WGs, brainstorm only!

Possible use of Gitlab for Extensions:

While we hope to keep Gitlab fairly organic and allow for some experimentation, some elements have been mentioned a lot, so they might be worth documenting up front.

Issue labels common across all projects

Ideally the groups should somewhat reflect the Teams and Working-Group structure, but there can be some exceptions where it makes sense (better visibility, structure, etc).

How one would search to find if an encountered problem was a known issue, an issue being addressed, etc.?

"It would really help if a non-developer, non Github user could get some sense of how to use the proposed repository and, specifically, how one would search to find if an encountered problem was a known issue, an issue being addressed, etc." (@dtarrant)

The proposed Gitlab structure would be to have project spaces around components/themes of CiviCRM (financial, cloud-native, translation, reports, etc, but there would still be a "core" project).

This would aim to create somewhat more manageable spaces where teams can prioritise within those spaces). We can also search across projects in Gitlab.

It might also be necessary to also search the pull-request queue on Github, in case someone directly opened a pull-request.

"We cannot expect our users to have to understand the internal workings of CiviCRM in order to choose where they need to file their bug report." (@cividesk/Nicolas)

"Note that if easy to move issues around projects in GitLab, we might resolve end-user reporting of issues through an external, non-authenticated form collecting basic info on the issue (and reporter), which would then create an issue in the 'triage' project in GitLab. The issue would then be triaged and moved to the appropriate development project by technical contributors." (@cividesk/Nicolas)

"Is there any type of structure proposed for entering issues? Key words, categories, etc. A form?" (@dtarrant)

"The ability to apply multiple labels/tags, to indicate which components an issue relates to, provides a more flexible classification system than having to create an issue in one of a number of projects." (@davej)

This seems to be one of the issues that has been raising a lot of concerns. It does require more clarification.

"Can a non existing user easily create an account and (issue) report?" (@xavier)

Anyone can create a civicrm.org account, but currently the accounts are still manually moderated (because of spam). It usually takes 24-48h to have an account validated. People can also ping on Mattermost (which is not connected to civicrm.org authentication).

"given the short timeframe to Jira issue creation being closed, is there a 'howto' for how / where to raise issues on gitlab for the uninitiated / non-dev / client minded" (Martin from Circle)

Currently there isn't a guide for reporting issues on JIRA (?), but it would be nice to have one for Gitlab. It's clear that, even for experienced developers, we need a clear guide on how to create a new issue.

"Who can add labels/assign/add milestone?" (@xavier)

Milestones should be added only when the PR is merged. It's impossible to know when issues will be merged, because we release monthly.

What about the 2000 open issues in JIRA that are not confirmed?

"Perhaps some clearer communication as to why those issues are not being migrated and some guidance or a notice posted in JIRA should be provided." (Justin-Agileware)

CiviCRM does occasionally purge issues that have not had activity in 18 months. Batch-closed issues can then be re-opened by people watching them (who will receive an email notification) and still interested on working on the issue.

Therefore we would encourage:

To be clear, we do hope to migrate more than the current 39 confirmed issues. The fact that there are only 39 confirmed open issues (out of 2000) shows that more triage needs to be done.

What about Stack Exchange?

(related to points raised by @dtarrant)

Stack Exchange is the front-line of support. Sometimes the answer is "this is a bug, therefore it needs to be tracked in an issue". As with JIRA, we will discourage people from opening support requests in Gitlab.

(fixme: needs to be merged with one of the points above)

Ex: a receipt for an event registration shows an incorrect amount. Should this be filed in the 'event', 'contribution', 'accounting' or 'civimail' project? Actually, neither because this is probably just a token issue so should be filed in the 'core' project. ref

We should avoid being over-zealous with the number of issue trackers, and experiment when it makes sense, when it doesn't. Ideally, they should be fairly close to the current list of Mattermost channels. We need to experiment more.

Gitlab also allows moving issues from one tracker to another (although we should only do this during triage, because it would be confusing to code commits with references to a specific issue).

For another way of seeing it: with LeXiM, some core components are being rewritten in extensions. Sometimes a Mosaico bug might be an unrelated core bug, for example. The same applies to the above example.

On being user-friendly, this is indeed a big challenge, no matter what. Currently the dev-team looks like this: 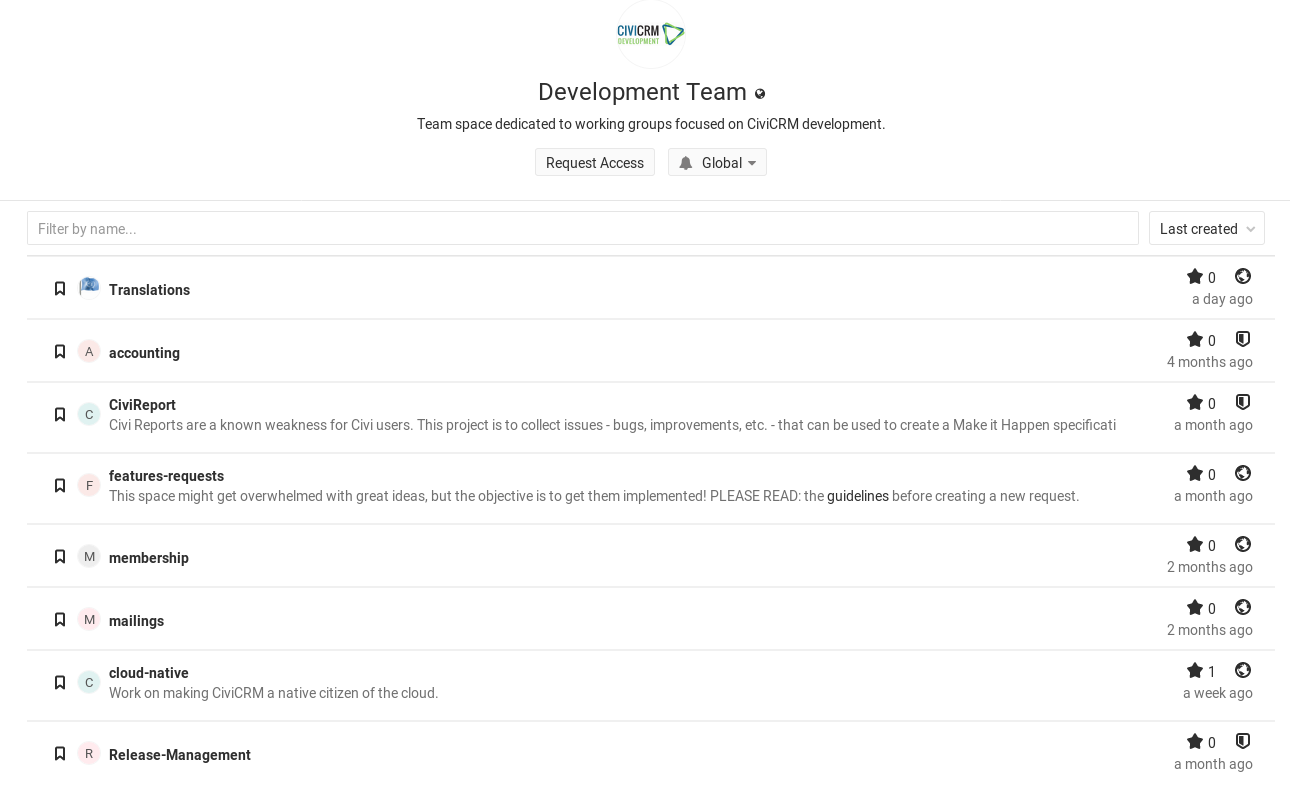 Note that currently there is no "core" project (todo). Ideally, each of those projects should have a clear description. The list should not be too long.

By comparison, JIRA has a lot of very powerful but difficult to use filters. As for Github, we would also have the challenge of whether to open issues in the WordPress/Drupal/Joomla/Backdrop, 'Packages' repositories, as well as extensions. However, Github does not provide a global view of issues and does not allow moving an issue from one project to another.

Gitlab has a per-issue privacy flag, but we would have to ensure that all issues created have that flag. Otherwise, it might be simpler to make the project fully private.

In any case, this needs more testing.