Hey All, I am Kartik and I had been selected for the GSoC Project Probots and Gitlab to GitHub Integration and so far I have completed 1 month of this project out of 3 months and I would like to share with the CiviCRM Community of the work-done during this project. For more info. regarding project details, you can refer here https://civicrm.org/blog/kartik1000/gsoc-project-probots-and-gitlab-github-integration.

So, to begin with, one of the issues I faced, in the beginning, was how to test the working of the civi-bot that already exists in civi-core by adding more code to it related to issues I aimed to solve. So, with much discussion with @eileen and Saurabh, we decided to create a dev-bot from the forked repo of probot-civicrm and use it for our purposes of testing. The code-repo for the same bot is present here with different issues I solved existing as different merged branches. Another issue I faced in setting up the dev-bot was hosting the bot. For the bot to be active always, we need to host it as a node-js application, the most suitable option for which are Heroku and glitch. For the simplicity of the glitch, I decided to use it for my purpose. The other issue that I faced was to keep the bot always active for that either one can use the ping method every 5 minutes or use the service of uptime robot.

This is an example of how a PR created by a new contributor looks like after making the required changes. 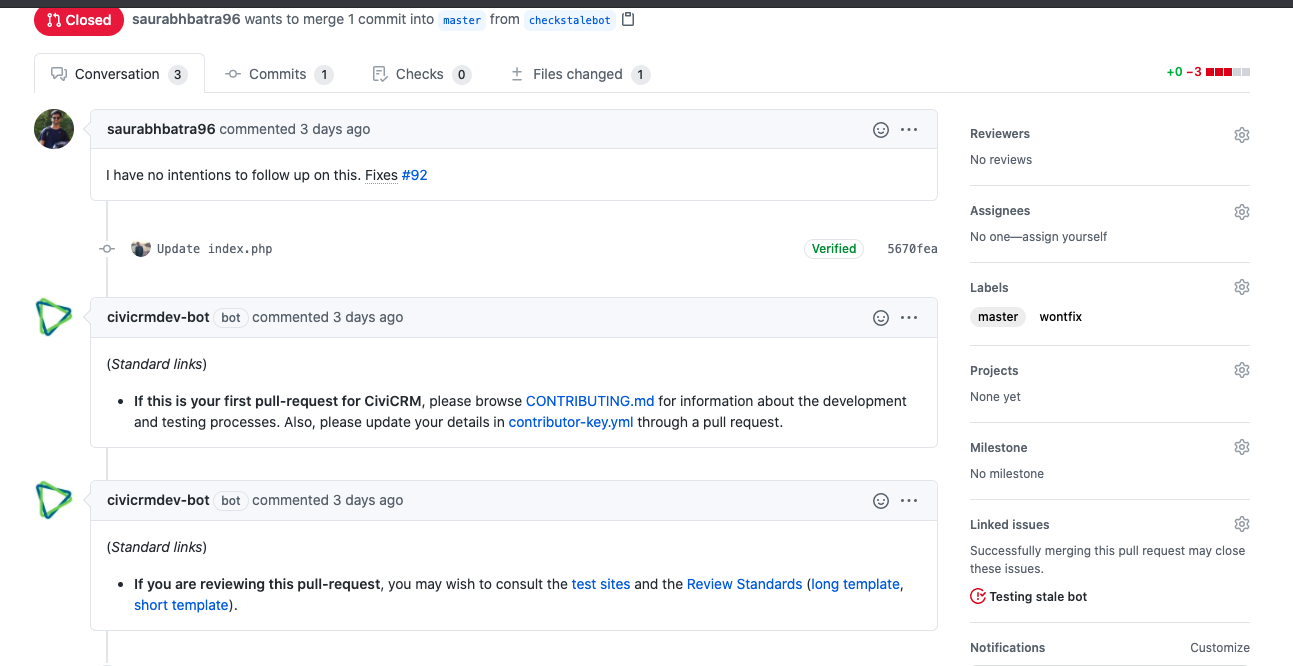 Till now I have learnt a lot of new things from this project especially how powerful the GitHub APIs are which allow the user to receive almost any information regarding their repository. In the upcoming months, I hope to learn even more new things. The entire code for the civicrmdev-bot is present in this repository. We plan to merge these features in the existing civi-bot in some time so that they can be used in CiviCRM-core. I request to all the community members if you have any ideas or thoughts on what other things I can do to automate our workflow during the remaining project, please comment them on this issue and thanks to all!